A thief led his victims straight to his front door after stealing seven legs of Iberico ham and leaving a trail of fat as he dragged them along the ground. Domingo Infante, 34, arrived at his tapas bar in southwestern Spain on Monday to find the door forced open and the till gone along with a TV and the cured meat that had been hanging above the bar. While he dealt with police and waited for a locksmith to come and fix the damage, wife Cristina, 36, and mother-in-law Maria, 68, spotted a trail of fat on the road outside.

They followed it along the pavement to a house behind their family-run business in Sanlucar de Barrameda near Cadiz. They then made a second call to police to say they had caught the suspected culprit. Officers rushed to get a search warrant after being refused entry to the rented property and found two of the legs of ham inside along with the empty cash till and TV. The cured meat has now been taken to the police station along with the other valuables while detectives search for the missing five legs, thought to be in the hands of the alleged criminal’s accomplices. 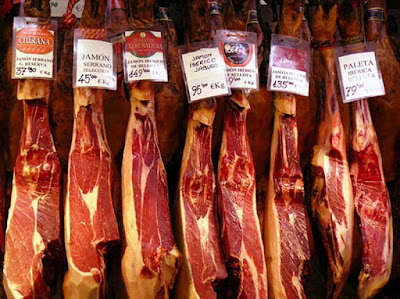 The break-in happened overnight in the early hours of Monday morning. Infante, whose bar is called Los Caracoles, English for The Snails, said: "We didn’t know whether to laugh or cry. It’s like something out of a silly film. I’ve never imagined my wife and mother-in-law would turn out to be the detectives who solved this. And even then they thought the fat trail from the ham would lead to a car park and a vehicle that had long gone, not a house in the street behind us. There were traces of fat everywhere, on the pavement outside the property, the stairs and even the front door."

The suspect lived there with his parents who wouldn’t let police in at first but they got a search warrant within 20 minutes and found the cured meat when they went inside along with the till and TV. "Each leg was worth around €120 and the till which had about €500 in it was empty. But every cloud has its silver lining and it looks like we’ll be getting some of what was taken back thanks to my wife and mother-in-law." Cristina added: "They smashed the door open and caused a lot of damage. We decided to follow the trail of the ham because they had dragged the legs along the floor. My mum had the idea. We got right to the house. Later we saw how the police brought almost everything that had been stolen out of the same house, except that is the other five legs of ham which we’d still like to get back."
Posted by arbroath at 6:02 am
Email ThisBlogThis!Share to TwitterShare to Facebook