A pair of wedding guests sparked an early morning brawl in a McDonald's restaurant after walking in wearing full Highland dress and playing the bagpipes. Calum Graham and Allan Gilruth had been at a wedding earlier in the day where one was performing and they decided to pipe themselves into the fast food outlet in Perth, Scotland. Other diners were not impressed with the musical accompaniment at 4am and told the duo to pipe down. That led to a heated argument and Graham and Gilruth both threw punches at other diners, leading to two men being injured. 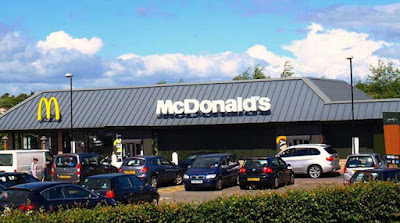 At Perth Sheriff Court on Thursday, the two men were fined £630 each after they admitted assault in the wake of the Valentine's Day wedding. Gilruth, 25, and Graham, 25, who has performed with the Pitlochry and Blair Atholl Pipe Band, were both told they could have caused serious injuries to their victims. Mechanic Gilruth from Pitlochry admitted assaulting Craig Menzies in McDonald's at Broxden on February 15 last year by punching him on the head. He admitted causing his victim to fall and strike his head on a seat to his injury. Plumber Graham, also from Pitlochry, admitted attacking Euan Fuller and punching him on the head to his injury during the same incident. A further charge against Graham of assaulting a staff member was dropped by the Crown.

Fiscal depute Jim Eodanable told the court: "At around 3.40am a group of four arrived at McDonald's at the same time as the accused. One of the accused engaged in conversation with the other group and they formed a clear impression that he was under the influence of alcohol. One of the parties made a comment which was taken the wrong way and Mr Gilruth punched the complainer. He falls to the ground and on the way down strikes his head off a seat in the booth. That complainer's friend then comes over to assist and the second accused then steps forward and swings a punch at him. The blow was deflected but it does strike the complainer. Fortunately for all concerned the injuries were not serious. Police were contacted."

Solicitor Billy Somerville, defending, said: "They were in full Highland dress because they had been at a wedding and one of them had been performing bagpipes at it." He said they decided to pull into McDonald's for something to eat and had taken the bagpipes in to play some tunes as they approached to order food. Some of the other diners obviously didn't appreciate their quiet meal being disturbed at 4am and they were asked to stop which led to an argument," Mr Somerville added. Sheriff Gillian Wade said: "The injuries were minor but they could have been more serious as one man hit his head as he fell to the ground. It is important this matter is put behind you and is not hanging over you for any period of time. I consider your behaviour to be broadly the same so you will both be fined £630."
Posted by arbroath at 6:02 am
Email ThisBlogThis!Share to TwitterShare to Facebook

What an incredibly Scottish story. The video was well worth watching. So funny.