A man exposed himself to a young mother on her way to watch her child in a school play. The distressed victim, who was pushing a pram, shoved him away. But he looked at her in shock and said, 'What's up? You're not normally like this'. The woman told Tony Cartlidge, 24, she did not know who he was and called him a 'psycho' before walking into the school reception and asking staff to call the police. Cartlidge told officers he thought the woman was his ex-partner and he believed showing her his private parts would get them back together.

Now he has been handed a 12-month community order with a rehabilitation activity requirement for 20 days. Prosecutor Sue Hayers told North Staffordshire Justice Centre the defendant exposed himself as the victim walked in Longton, Staffordshire, at 2.30pm on November 5. She said: "She heard a noise coming from a garden. She saw a man. She heard the same man behind her. As they passed a wheelie bin she stopped and told him to go first but he told her to go. She thought his behaviour was weird. 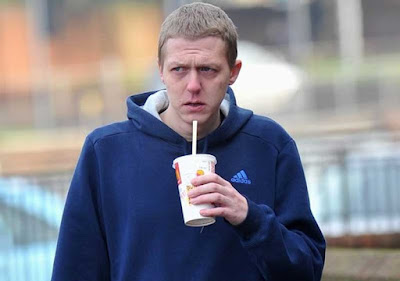 "He said, 'Do you want to see something?' She was creeped out. She told him to go away. He didn't. He said, 'I will show you in a minute'. She was walking quite fast and out the corner of her eye she saw he was 'messing with himself'. She pushed him away with both hands by his shoulders. He looked at her in shock and said, 'What's up? You are not normally like this'. She said, 'I do not even know who you are, psycho'." The incident left the woman feeling frightened. The defendant told police he thought the woman was his former girlfriend.

He said he thought showing her his private parts would get them back together. Cartlidge, of Normacot, pleaded guilty to outraging public decency. He also admitted stealing sugar and milk from a petrol station on November 7. Zoe Leese, mitigating, said: "He thought the lady was his former girlfriend. At the time of the offences he was misusing substances. He is disgusted at himself and wants to put it behind him." Magistrates fined Cartlidge £50 and ordered him to pay his victim £200 compensation. He must also pay £320 costs, a £60 surcharge, and £2.90 compensation to the garage.
Posted by arbroath at 6:00 am
Email ThisBlogThis!Share to TwitterShare to Facebook

"... he believed showing her his private parts would get them back together."

Did they break up because she thought he had none? How on EARTH could ANYone think this was a good idea?

I want to talk to this man. How does he manage to function? Does he hold a job? Does his family know he's out and about?

It seriously boggles the mind.