A nightclub has been banned from bringing in crocodiles as a new attraction for customers. Arabian Nites in Birmingham had already bought four of the reptiles. But council bosses have blocked the creature feature at the venue.

Club owner Qamran Rafique had hoped revellers would be able to feed the crocs. “It’s a bit of a blow because I’ve paid for them,” he said. “A friend is looking after them and I intend to have another go at getting permission. 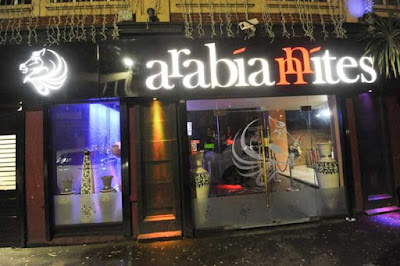 “The idea was to let customers feed them but the council thought it was too dangerous.” Birmingham City Council pulled the plug on proposed croc’n’roll nights on the grounds of public safety and animal welfare.

A Birmingham City Council spokesman said: “Arabian Nights made an enquiry about gaining permission to have crocodiles on its premises. The officer advised this would be unlikely, so the business decided not to pursue it any further.” Qamran, who opened the venue a year ago, added:. “There are plenty of other plans. We’re thinking of a shark tank.”
Posted by arbroath at 6:00 am
Email ThisBlogThis!Share to TwitterShare to Facebook