An Australian man has taken himself to hospital after a venomous redback spider bit him on the penis.

The tradesman was using a portable toilet on a Sydney building site on Wednesday morning when he was bitten. A spokesperson for St George Hospital confirmed that a 21-year-old man was treated for a redback bite. 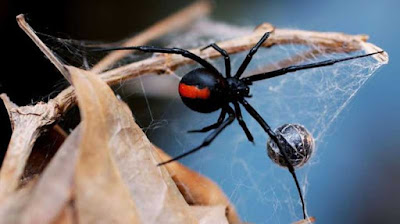 The redback spider, closely related to the black widow spider, is distinguished by a long red stripe on its abdomen. The spider's bite causes severe pain, sweating and nausea.

The owners of the property confirmed that the man had been bitten on the penis. He was later discharged from hospital in a stable condition. Although there are recorded cases of deaths from redback bites, none have occurred since the development of antivenom in 1956.
Posted by arbroath at 6:03 am
Email ThisBlogThis!Share to TwitterShare to Facebook

everything in Australia exists for the sole purpose to kill humans... Even the Wombats

And this ladies, is why the men leave the toilet seat up. So you can see if there are any spiders. I wonder how the spider feels, crawling around with the taste of human penis in his mouth, ewwww. (I know, I'm being silly).