A Nottinghamshire woman is thrilled after paying more than £400 for the 'pickled' earlobes of a circus performer. Hannibal Hellmurto, from the Circus of Horrors group, stretched his earlobes to 62mm as part of a wider 'body modification programme', which included tattoos, a forked tongue, floating ribs and teeth made from the ivory of a mammoth 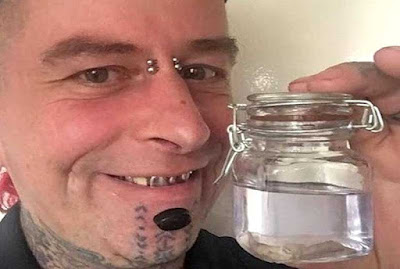 As the skin around his earlobes began to thin, however, and not even superglue could keep them together, he says his only course of action was to have them cut off and stitched back together. But when someone suggested purchasing the detached lobes, he decided to pickle them in a jar and put them up for sale by auction. Sarah Martin, of Kirkby-in-Ashfield, won the auction, buying the lobes for £460.

Mrs Martin, 41, considers herself a 'collector of all things weird'. She said: "I was willing to pay up to £1,000 for the lobes. I'm a huge fan of the Circus of Horrors and it's such an interesting artefact to have." Mrs Martin already owns an 'Adolf ventriloquist doll', and says the pickled earlobes are an excellent addition to her collection. The mother-of-four is still waiting for her new purchase to be delivered by the auctioneer, as she said she doesn't "trust the post" with such a "unique item". 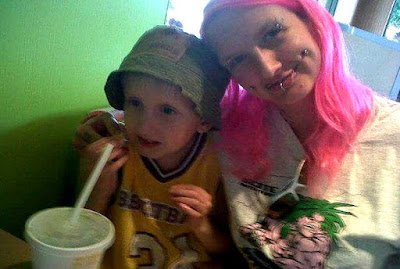 Mr Hellmurto, a sword swallower, believes that this may be the first time a piece of an earlobe has been sold in an auction. He said: "After I had the operation to remove my earlobes I 'kept my ear to the ground' in case an opportunity came up for someone to quite literally take a little piece of me home with them." A spokesperson for the auctioneers said: "As far as we know, we are the first auction house to sell physical chunks of flesh of a living person that the buyer can take home and proudly display on their mantelpiece." Mrs Martin put in her winning bid on Sunday, and is expecting to receive her new pickled lobes in the next few days.
Posted by arbroath at 6:00 am
Email ThisBlogThis!Share to TwitterShare to Facebook

I think the chances of them being nicked by the postman are really pretty slim.

I feel so sorry for that woman's 4 kids.