Schoolgirl breaks world record for balancing snails on her face

A schoolgirl has set a new world record - by having 25 slimy snails slither over her eyes, nose and mouth.

Tiana Walton, 9, of Pye Corner Farm, Alvanley, is awaiting official confirmation that she is a record breaker for keeping snails on her face.

Guinness Book of Records rules state that the competitor has just one minute to put the snails on their face before tipping their heads forward for 10 seconds. 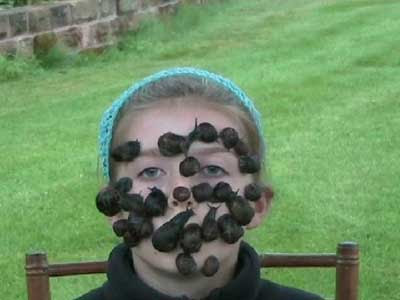 Animal loving Tiana, who next week starts year five at Abbey Gate School, said: "I am not squeamish. It is relaxing but it feels a bit cold. They are quite smelly and you can see their big long eyes facing you. I think my friends at school will say "urgh".

"I might try a different one now, or I would like to go the Olympics and be a gymnast."

There's a news video here.
Posted by arbroath at 9:53 am
Email ThisBlogThis!Share to TwitterShare to Facebook