For the first time in 68 years, the powers-that-be at Kentucky Fried Chicken plan to move the company's famed, secret Original Recipe.

KFC officials say the recipe, which is handwritten by Colonel Harland Sanders, will be temporarily relocated while KFC modernizes security at its corporate headquarters. 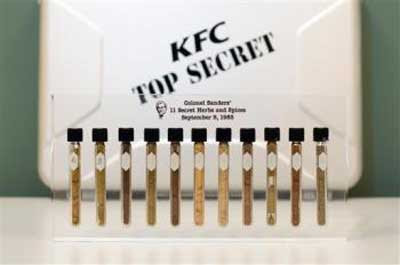 In order to move what it calls one of "America's top corporate secrets", KFC says the recipe will be stashed in a briefcase, which will be locked and handcuffed to the wrist of national corporate security expert Bo Dietl. He will then board an armoured car and will be escorted in a high-security motorcade with the help of the Louisville Police Department and the security company Brink's.

The recipe will be moved to an undisclosed location for safe keeping.
Posted by arbroath at 9:24 am
Email ThisBlogThis!Share to TwitterShare to Facebook