Immigration minister Phil Woolas has become the victim of a pie-throwing protester, angry at his call to limit UK immigration.

A member of the No Borders group threw a cream pie into the minister's face while he was speaking at a debate at Manchester University. 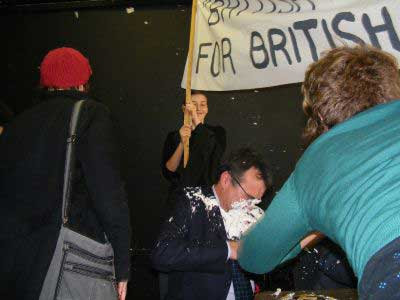 A spokeswoman for the group said Mr Woolas had been "spouting right-wing anti-immigration policies".

The No Borders group, which campaigns against immigration controls, were angered by Mr Woolas' recent remarks, in which he said the government would not allow the UK's population to rise as high as 70 million.

A spokeswoman for No Borders said: "We threw the pie because we didn't want to engage in debate and legitimise what he was saying."

A Home Office spokeswoman said the minister declined to comment. Mr Woolas was unharmed and later rejoined the debate.

There's another video here.
Posted by arbroath at 9:01 am
Email ThisBlogThis!Share to TwitterShare to Facebook