And for dessert: camel chocolate

Coming to a sweet shop near you – camel milk chocolate. The makers of Al-Nassma, the Arabic for a cool desert breeze, are planning to break into the European chocolate market with their own special recipe.

Although camel milk is a traditional staple among Beduin tribes, it has never before been used in chocolate. Al-Nassma, which is available only by special order within the UAE, tastes slightly sweeter and richer than traditional chocolate, but also costs more, selling for about £4.50 a bar. It is billed as “a true innovation . . . deemed to conquer the world as the sweet ambassador of Arabia”. 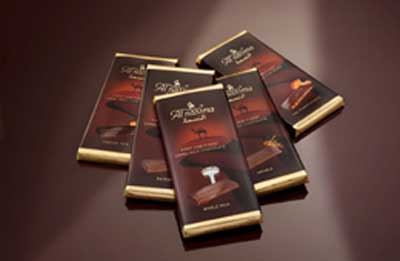 Martin van Almsick, the general manager of Al-Nassma’s makers, also called Al-Nassma, said: “Nobody thought about using camel milk before, then people from the camel world met people from the chocolate world and it occurred to everybody that it was obvious.”

He said that it took nearly three years to get the recipe right. “There was a huge amount of trial and error.”
Posted by arbroath at 9:39 am
Email ThisBlogThis!Share to TwitterShare to Facebook