An 11-year-old girl in Mumbai, India, was hospitalized with pain in her stomach, and surgeons were forced to operate. What they found was a foot-long hairball.

The mass of hair - known as a trichobozear -is a potentially fatal result of a mental illness called trichotillomania, a condition in which the patient pulls her hair out and, in many cases, eats it. And while the condition is not well known, American doctors say that it may afflict 1 percent of all Americans. 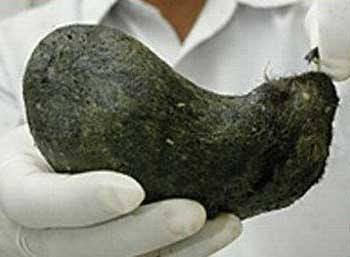 "It's a fairly uncommon outcome for trichs," said Dr. Martin Franklin, associate professor of clinical psychology and psychiatry at the University of Pennsylvania, who studies trichotillomania in children and adolescents. "But it's pretty life-threatening if you do end up here."

While he notes that most who have trichotillomania do not eat their hair after pulling it out, he said this extreme form of the condition occurs in between 30 and 50 percent of patients. While cases like the one in Mumbai are not common among trichotillomania sufferers, several occur every few years and they can be fatal when they result in bowel obstruction.
Posted by arbroath at 10:01 am
Email ThisBlogThis!Share to TwitterShare to Facebook