Snakes often turn up in strange places but one brown tree snake has joined the digital age. It has set up home in a printer of Australian couple Denis and Marie Matthews.

Marie is the publicity officer for the Friends of the Lismore Rainforest Botanic Gardens and one of her jobs is to produce the group's monthly newsletter.

So when Brian, who is the group's secretary, went to print off the envelopes for the newsletter he couldn't get anything out of the printer. 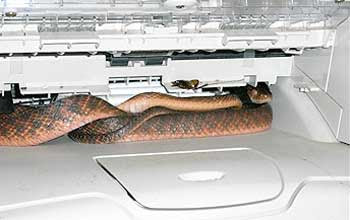 That's when he found the metre-long reptile curled up comfortably in the printer and causing a paper jam.

Denis managed to shift the reluctant snake after attempts to coax it out through the back of the printer failed. Denis suspects it is still in the computer room as he frequently finds small objects knocked from shelves.

The nocturnal brown tree snake is often referred to as the night tiger and is usually very aggressive when confronted.
Posted by arbroath at 9:53 am
Email ThisBlogThis!Share to TwitterShare to Facebook