Throwing a stick for dog could damage its health

Dan Brockman, a professor of small animal surgery at the Royal Veterinary College, has advised owners to use rubber toys or balls instead. In a new report, Prof Brockman catalogued serious injuries caused by dogs being stabbed by sticks they have rushed to collect for their masters.

"When I see people throwing sticks for their dogs in the park I just get so frustrated," he said. "I want to go and tell them to stop."

Prof Brockman's report, which was co-authored by Zoe Halfacree, another expert in small animals from the Royal Veterinary College, details cases of dogs being paralysed after a stick stabbed their spinal cord. 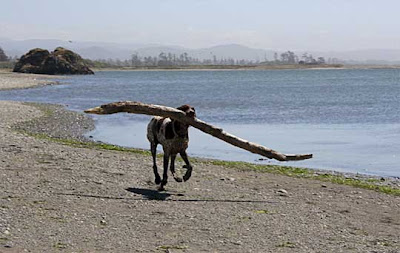 It also recorded incidences of dogs having their internal organs damaged by sticks stabbing their bodies. Some have also died after an infection caused by splintered sticks spread around the body, the report added.

Prof Brockman said that dog-owners, who may be surprised by the report's warning, should be aware of the potential costs of an incident involving a stick. He said: "I have seen injuries that have cost up to £5,000 in treatment fees, but where the dog has still died in the end."

However, Prof Brockman cautioned that even owners who use balls for their dogs' toys must take care. He added: "You must make sure the size of ball is right for the dog. I have had to operate on dogs that have swallowed tennis balls too."
Posted by arbroath at 9:39 am
Email ThisBlogThis!Share to TwitterShare to Facebook