Men in their 30s smell of cooking oil

Japanese researchers have concluded that men in their 30s smell primarily like used cooking oil, and the odour is caused by a chemical called pelargonic acid.

The research conducted by daily use products maker Lion was first undertaken after many male workers mentioned that when they entered their 30s their body odour seemed to change.

In a hunt for answers, the researchers undertook a study of male body odor over different age groups, with 148 men from their teens to their 70s taking part. The research subjects each wore T-shirts for 14 hours straight, after which the garments were handed over for testing. 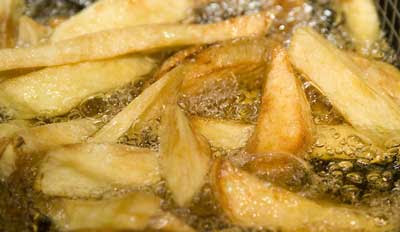 The researchers analyzed the smell of different parts of the T-shirts, such as the back and chest areas. From the tests, it was determined that the odor of men in their 30s was different to that of younger men or boys, and also from the smell of older men.

The cause of the odour was traced to a type of skin oil. The oil, or sebum secretion, is a fatty substance produced by glands in the skin. The glands are especially common in the skin of the chest and back, and reach peak production when a man reaches his 30s. The smell itself is caused when these sebum secretions oxidize, producing the odorous pelargonic acid.

On the bright side for those 30-something men worried about their personal scent, researchers also found that the extract from seeds of the Evening Primrose flower can combat the oily odour.
Posted by arbroath at 10:08 am
Email ThisBlogThis!Share to TwitterShare to Facebook