Ski world record made by mistake

Proof that a Norwegian skier unintentionally made a record-breaking cliff jump has emerged. Footage showing free skier Fred Syversen shooting over a 107 metre (351 feet) cliff has been leaked nearly a year after the event took place.

The record had been in contention because of a lack of evidence. But the new video shows Syversen making the accidental, record jump . Syversen, who was filming a ski video at the time was preparing to undertake a massive cliff jump in the French Alps. 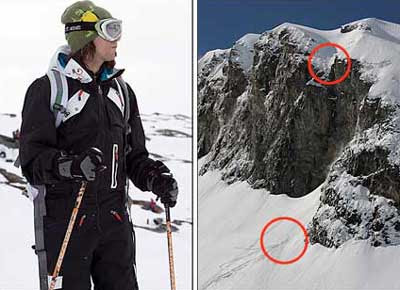 But the Norwegian accidentally veered off his original course and ended up flying towards a much larger drop at 50mph. "Breaking or trying to stop was no longer an option," Syversen said.

"It simply went too fast. If I had tried that I wouldn’t write this. So that left one choice: go for it, and do it right."

Luckily he managed to avoid any big rocks and landed in deep snow.

He was dug out of the two-metre hole he was buried in by his friends and managed to ski down to a waiting helicopter that flew him to hospital. The only injury Syversen sustained was minor damage to his liver.
Posted by arbroath at 9:46 am
Email ThisBlogThis!Share to TwitterShare to Facebook