After driving her speeding car through a Kapolei home, an allegedly drunken 19-year-old woman pleaded with the homeowner, "Don't tell my mother," neighbours said.

At about 3:45 a.m. Saturday, the woman's boyfriend was called to a party on Halahinano Street in Kapolei Knolls to pick her up because she was intoxicated, police said. When the boyfriend arrived, the woman got into her car and sped away on Halahinano, a dead-end street. 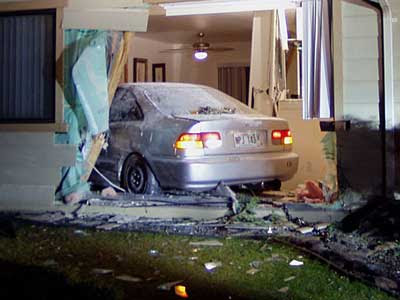 She crashed into a two-story house at the end of the cul-de-sac, continued through the living room and kitchen, and did not stop until she was on the backyard patio.

Police said a family of four was sleeping upstairs at the time, and no one was injured. The car took out the load-bearing beam, causing the house to sag. 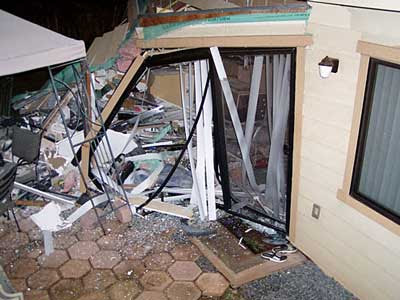 The driver was taken to the hospital with minor injuries and arrested on suspicion of underage drunken driving, police said.

Mark and Sylvia Tsuda own the home at 91-1540 Halahinano St., which is valued at $340,800, according to the city property tax Web site.
Posted by arbroath at 10:13 am
Email ThisBlogThis!Share to TwitterShare to Facebook