Jeff Snyder said he is tired of living like a prisoner inside his home as drug dealers and prostitutes roam in his York city neighbourhood. In the past three years since moving to the first block of South Penn Street, Snyder said, he has called 911 repeatedly to report drug dealers to police.

Finally fed up at what he calls inaction on the part of authorities, Snyder placed a sign in his storefront window this week telling drug dealers they were free to sell all the crack they wanted because the city police will not do a thing about it. 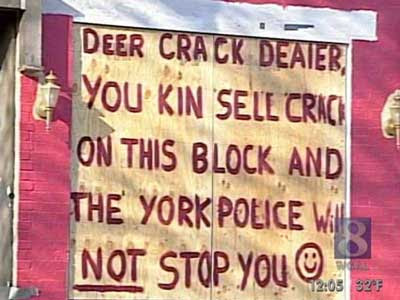 "I am fed up. I am so stressed out. I am a prisoner in my own home," Snyder said on Saturday.

The sign went up the day after, Snyder said, he witnessed a drug deal and wasn't happy with the police response.

At first, Snyder did not want his name associated with the sign. He, like many of his neighbours, are afraid of retaliation in a neighbourhood where they often hear gun shots. Snyder said he has a jar full of spent bullet shells he has collected off the sidewalk.

Snyder broke his silence on Saturday after he walked out of a convenience store and a man he says is a crack dealer pointed his thumb and pointer finger at him as if it were a gun. "I am scared out of my pants," Snyder said.
Posted by arbroath at 10:11 am
Email ThisBlogThis!Share to TwitterShare to Facebook