Australians have been shocked to see stray dogs shot to death on a popular Bali beach as authorities try to contain a rabies outbreak blamed for at least eight human deaths.

More than 2,000 stray dogs have been culled since the rabies outbreak in early September, with Bali's governor Made Mangku Pastika ordering animal husbandry officials to rid the resort island of all street dogs. He has called on villagers to join in by exterminating strays themselves.

The culling program has used strychnine-laced meatballs as bait, angering animal rights activists and residents whose pet dogs have been inadvertently poisoned. Reports are also emerging of some officials using unsanctioned methods. Australian Simon Blaby, a chef in Bali, said he saw a man shoot a dog in broad daylight on Seminyak beach last Friday, just metres from a Balinese Hindu ceremony. 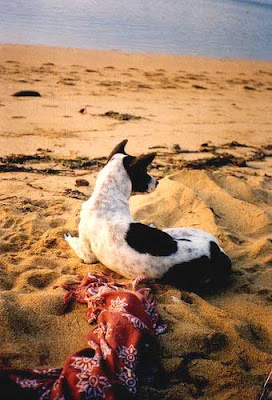 "One of the guys from the public health department was walking up and down the beach with a small calibre gun and shot a dog that they deemed dangerous", Blaby said. It had really bad skin and looked fairly liable to bite, so the guy made the judgment call and shot it and dragged the body by the hind leg into the bushes." Blaby said he later saw a second dog corpse in the bushes.

Animal rights activists were outraged. "They are nuts," said Janice Girardi, founder of the Australian-funded Bali Animal Welfare Association (BAWA), which runs a clinic and sterilisation program in Ubud. "Actually, if they shoot straight it's more humane than strychnine, but if they miss, the dogs can be in pain for a long time." Sydney woman Paula Hodgson, who founded the Australian-based Bali Street Dog Fund in 1999 to raise money for BAWA, was boycotting Bali. "I won't be returning to Bali until they stop this killing," she said.

Activists said pet dogs in Bali were often allowed to roam the streets and many had fallen victim to the culling program. Australian Kirsten McGrath said her dog died in early December after eating a poisoned bait near her Sanur home. "We found her dead surrounded by vomit and faeces in our garage, where the gate was open, and the little meatball was next to her body," McGrath said.
Posted by arbroath at 10:00 am
Email ThisBlogThis!Share to TwitterShare to Facebook