The loneliness of the male synchronised swimmer

German synchronized swimmer Niklas Stoepel has won major national competitions, but he has still been banned from competiting at the international level. Officials in the sychronized swimming world, it seems, still aren't ready for men to participate in the sport.

Niklas Stoepel is the only competitive male in synchronized swimming in Germany. The 17-year-old high school student from the western German town of Wattenscheid continues to battle an unusual form of gender discrimination and prejudice in his push to compete at the international level. 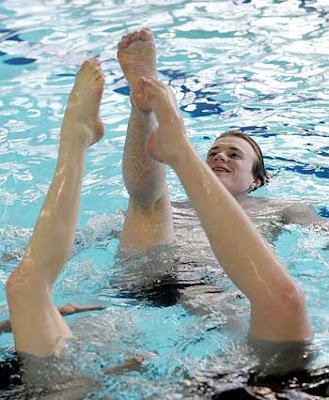 So far, though, his applications to compete have been rejected by the international swimming federation FINA, and his prospects for going to the Olympics remain limited at best.

In Germany, where the German Swimming Association is a bit more tolerant of men in the sport, Stoepel has already become national youth champion with his FS Bochum team in group competition.
Posted by arbroath at 9:49 am
Email ThisBlogThis!Share to TwitterShare to Facebook