One of the original signed prints of Albert Einstein sticking his tongue out at photographers has been sold by a New Hampshire auction house for $74,324. Bobby Livingston, of RRAuction.com in Amherst, says the picture was taken in 1951 after a 72nd birthday celebration for the physicist.

Einstein had nine prints made. He signed the print that was auctioned on Thursday and gave it to journalist Howard K. Smith. 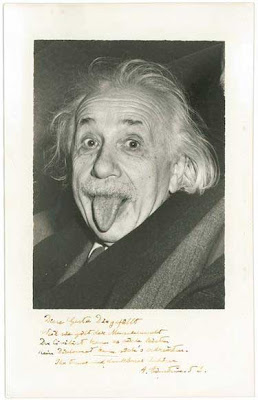 In his inscription, Einstein said his gesture was aimed at all of humanity. Livingston says it also was aimed at the Red Scare and the McCarthy anti-Communist hearings of the 1950s.

David Waxman of Great Neck, N.Y., is the new owner. He is a specialist in important scientific books and autographs.
Posted by arbroath at 9:46 am
Email ThisBlogThis!Share to TwitterShare to Facebook