A letting agency in Dundee is taking radical measures to name and shame tenants who are running up rent arrears. Lease2Keys are installing “for sale”-style signs outside properties with "Rent Dodger Lives Here", emblazoned on them.

The housing charity Shelter says it is outraged by the shock tactics. The company is unrepentant.

Landlord Elaine Stenson said: “We put the signs up purely to raise awareness. The general issue is non-payment of rent and Lease2Keys is an organisation that operates a zero-tolerance attitude to that issue”. The company says the problem has arisen through changes in legislation that mean housing benefit is now paid directly to tenants as opposed to the landlord. 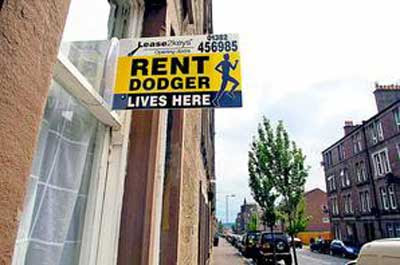 Ms Stenson added: “The public should be concerned that money they pay that goes towards housing benefits is not going towards the intended source. It goes into the tenants’ pockets instead of the landlords”.

Gordon MacRae of the homeless charity Shelter is outraged by the letting agents’ actions. He said: “We thought tarring and feathering went out with the middle ages. People who find themselves in rent arrears usually have multiple reasons for being in debt.

“We’re quite shocked by the actions of these letting agents. We think it’s a bit of a PR stunt for them to try and make a name for themselves. Like every landlord in the country, they’ve had to pass a fit and proper person test – we would ask the question of Dundee City Council as to whether this type of behaviour is consistent with that standard”.

With news video.
Posted by arbroath at 10:08 am
Email ThisBlogThis!Share to TwitterShare to Facebook