A man was stunned when he discovered a ghostly image of Michael Jackson on his car bonnet. It appeared to show that the 'King of Pop' had made a swift ascent to the heavens after his death.

Father of two Gary Sloggett, 43, had taken some photographs of his Rover 200 with the intention of submitting them to a car sales magazine. But when he uploaded the snaps onto his computer he was shocked to see Michael Jackson who had died just 13 hours earlier - staring back at him.

'It's quite extraordinary,' said Gary, of Stafford. 'The obvious explanation is that it seems to be some sort of cloud formation that just happened at the time. But I've shown the picture to quite a few people and without prompting they all say: 'That's Jacko.' 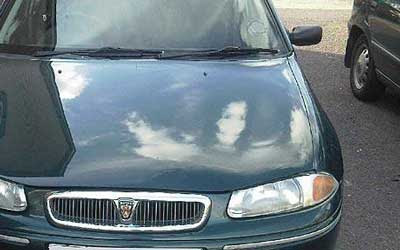 'To be honest I'm a bit of a sceptic and I'm not the world's greatest Michael Jackson fan, but as soon as I saw the picture on my computer it set me thinking. I'm not saying I've been touched by any sort of presence, but it is pretty unusual. I was a bit bemused to say the least. '

Gary, who is married to Moira, 41, and has two children, Amy, 13, and Thomas, 11, went on: 'I didn't upload the pictures for a few days but I took them at around 10am on the day after Michael Jackson died. When I saw the picture I immediately turned to my wife and said: 'What is Michael Jackson doing on my car bonnet?'

'If you look at the picture for long enough it even looks as if he has got wings.' Mr Sloggett eventually sold his Rover 200 for £650.

With news video.
Posted by arbroath at 9:06 am
Email ThisBlogThis!Share to TwitterShare to Facebook