Ready to give your soul for a loan in these difficult economic times? In Latvia, where the crisis has raged more than in the rest of the European Union, you can. Such a deal is being offered by the Kontora loan company, whose public face is Viktor Mirosiichenko, 34.

Clients have to sign a contract, with the words "Agreement" in bold letters at the top. The client agrees to the collateral, "that is, my immortal soul."

Mirosiichenko said his company would not employ debt collectors to get its money back if people refused to repay, and promised no physical violence. Signatories only have to give their first name and do not show any documents. "If they don't give it back, what can you do? They won't have a soul, that's all," he said in a basement office, with one desk, a computer and three chairs. 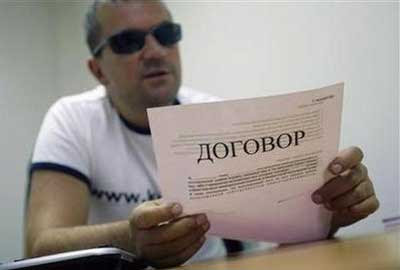 Wearing sunglasses, a black suit and a white shirt with the words "Kontora" (office) emblazoned on it, he reaches into his pocket and lays out a sheaf of notes on the table to show that the business is serious and not a joke.

Latvia has been the EU nation worst hit by economic crisis. Unemployment is soaring and banks have sharply reduced their lending, meaning that small companies offering easy loans in small amounts have become more popular.

Mirosiichenko said his company was basically trusting people to repay the small amounts they borrowed, which has so far been up to 250 lats ($500) for between 1 and 90 days at a hefty interest rate. He said about 200 people had taken out loans over the two months the business was in operation.
Posted by arbroath at 10:11 am
Email ThisBlogThis!Share to TwitterShare to Facebook