Last year he was colouring in dinosaurs with crayons, but this weekend a seven-year-old boy from Norfolk has sold a batch of 16 watercolours, oil and pastel landscapes for £17,000. Inspired to start painting on a family holiday in Devon and Cornwall last year, Kieron Williamson was just six when he asked his parents for paper to draw a boat and swiftly developed a mature and assured talent for seascapes and rural scenes that has been described as close to the "young Picasso".

Kieron, from Holt, had his work snapped up by buyers as far afield as Japan, Canada and Germany within the first 14 minutes of his exhibition, which opened in a Norfolk gallery on Friday morning. 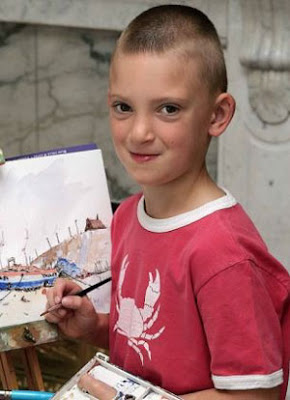 The paintings – an atmospheric mix of Norfolk seascapes, harbours, sunsets and churches – have been widely acclaimed by art critics. The talented boy, who described his show's sellout success as "brilliant", now plans to buy himself a new set of pastels for Christmas, as well as a work by his artistic hero, the late Norfolk landscape artist Edward Seago. His parents, Keith and Michelle, plan to invest the rest of his earnings for him until he is older.

Adrian Hill, who runs the Picturecraft Gallery in Holt where the paintings went on display, said some buyers were reduced to tears by the standard of Kieron's work, while other investors ringing from abroad fought to get through on the gallery's phone line. 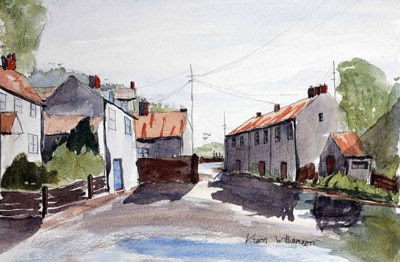 He said: "It was just amazing. The sale was over before it started. I have had fabulous sell-out shows before, but never in that space of time. It was absolute bedlam.

"Kieron is now simply one of the most coveted British artists out there. He is red-hot. I believe the last child artist in this bracket was Picasso. And Kieron is getting better and better and better: the pace at which he learns is quite amazing."
Posted by arbroath at 8:52 am
Email ThisBlogThis!Share to TwitterShare to Facebook