Japanese farmers turn to dogs to guard crops against monkeys

As farmers continue to wrestle with the problem of crop damage caused by wild monkeys, some are turning to man's best friend for a solution, with the training of "monkey dogs" to guard fields.

Around 30 participants and 10 dogs were present at the Yamanashi Prefecture's first monkey dog training course last November. As members of local governments and agricultural co-operatives looked on, dogs and handlers headed into a mountain forest, followed 30 minutes later by the shrieking of monkeys as they were driven away from the outskirts.

The prefecture's Agricultural Technology Division says wild monkeys cause around 70 million yen in damage to crops such as potatoes and sweet corn every year. And while damage caused by other animals has dropped off, that caused by monkeys -- which aren't afraid of humans, and are smart enough to evade electric fences and other static measures - has remained constant. 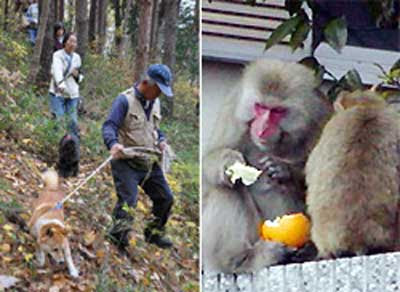 To counter this, monkey dogs are trained to recognize monkeys by scent alone, alert their handlers by barking and finally chase them out. Veterinarian Kunihiro Yamashita, 56, who works as an instructor for the Regional Exchange Center in Komoro, Nagano Prefecture, says even though various types of dogs can perform the task, common toy dog breeds aren't suited to the job.

Monkey dog training courses have also begun in Kamaishi, Iwate Prefecture, and at Matsusaka in Mie Prefecture. In Nagano's Omachi, which became the first city to fund such courses in 2005, three or four dogs are trained a year, with 19 monkey dogs now guarding local farmlands.

However, the dogs haven't enjoyed overwhelming success so far. "If there are dogs protecting a field, the monkeys will simply go to another one. We can't put dogs in every field," says one Omachi city official. If the monkeys realize the dogs aren't aggressive, they won't be afraid of them; and there have also been incidents of monkeys stealing the crops and eating them in trees out of harm's way.
Posted by arbroath at 9:04 am
Email ThisBlogThis!Share to TwitterShare to Facebook