Cat who got head stuck in storm drain reunited with owner

The cat who got her head stuck in a storm drain in Norfolk on Wednesday has been reunited with her owner. Animal control reported yesterday that they found a cat hanging from a grate on Strawberry Lane by her head.

Not knowing who the cat's owner was, they called the cat "Rubick" and brought it to an area hospital, where she was freed from the storm drain. 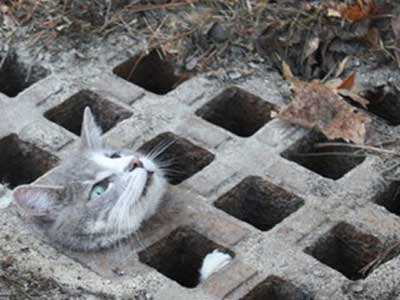 Her owner, LeeAnn Spiess, found out about her cat, whose real name is "Emme," and went to go see her at the hospital. Speiss said that Emme is going to be fine and is on medication and resting. She will be picked up from the hospital on Friday.

It is not known how the cat got stuck, but Norfolk police are guessing that the Emme was chased by something, ended up in an open culvert pipe nearby and then tried to squeeze through the grate.
Posted by arbroath at 8:15 am
Email ThisBlogThis!Share to TwitterShare to Facebook

First the foxes, now a kitty. Maybe the design of the storm drain should be rethunk.