Motorway bosses have hired a full-time team of druids to build a series of mini Stonehenge monuments to drain 'negative energy' from accident blackspots.

The team - which has secretly been working for Austrian authorities for two years - is said to have reduced fatal accidents at one notorious crash site to zero after restoring its "terrestrial radiation."

Chief engineer Harald Dirnbacher from Austria's motorway authority ASFINAG explained: ""We were really sceptical at first and certainly didn't want people to know what we were doing, so we kept it secret." 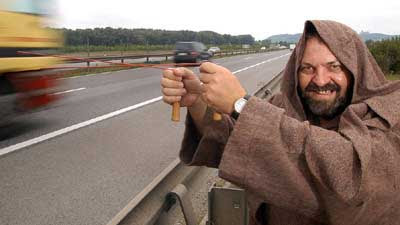 But now the trial results are so impressive officials are spreading the scheme nationwide. One blackspot's fatal accident rate fell from an average of six per year to nothing after the druid treatment, where they search for negative radiation with dowsing rods.

But the druids warn that they could be fighting a losing battle as the biggest cause of radiation disruption is mobile phone masts.

Senior druid Ilmar Tessmann explained: "It is a big job. Evert one of these masts spreads negative radiation over an area of 120 to 200 miles. "
Posted by arbroath at 8:05 am
Email ThisBlogThis!Share to TwitterShare to Facebook

How do people believe this woo?!

People who do not want to acknowledge that they made a big mistake on the lay-out of that road will do anything to distract others from seeing what's really going on...