Afghanistan's Taliban warlords have developed a bizarre way to deal with foreign forces: they have trained monkeys who love to eat bananas and peanuts to be killers. Taliban forces have taught monkeys how to use the Kalashnikov, Bren light machine gun and trench mortars. They also teach them how to identify and attack soldiers wearing U.S. military uniforms.

Ironically, the idea of training monkeys to fight was first invented by the U.S. Central Intelligence Agency. The CIA in the Vietnam War initiated a program that used the peanuts and bananas as prizes to train some "monkey soldiers" to kill Vietnamese in the jungle. 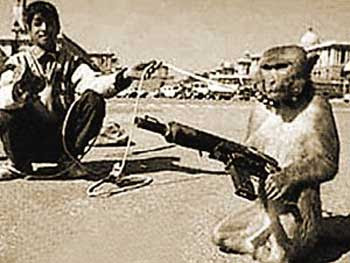 It is reported that these monkey soldiers are mainly composed of macaques and baboons hunted at an early age in the jungle and sold to the Taliban. These monkey babies who lost their mothers are sent to a secret Taliban training base to become killer monkeys. Taliban militants use a series of rewards and punishments to gradually teach them how to use the lethal weapons.

Recently, a British journalist went to Pakistan and Afghanistan border of Waziristan’s tribal region where he witnessed a few of the monkey soldiers armed with an AK-47 rifle and Bren light machine gun. Taliban militants in the past have strictly kept the program secret. 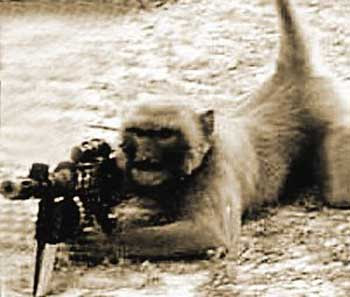 However, Taliban leaders have recently taken the initiative show monkey soldiers to tourists of the Pakistan-Afghanistan border area. Apparently, the Taliban look on monkeys as "propaganda tools."

"If a person who loves animals knows the monkeys may be injured in the war, they might pressure the government to force the withdrawal of western forces in Afghanistan," said one Taliban insider. A senior U.S. military source confirmed the existence of the Taliban monkey soldiers, military experts call armed monkeys "monkey terrorists."
Posted by arbroath at 8:10 am
Email ThisBlogThis!Share to TwitterShare to Facebook

This seems like a Hoax. Or maybe just maybe a video game maker is putting this out if the Monkeys win 10 points and  win and move on into the next level and as a reward they will get peanuts and Bananas.

by no means i wish to insult the animals, but don't most talibans look & smell like monkeys too ??? - maybe thàt's the way they tricked the poor animals ????

it's terrible, but this sounds awesome

Ironically, the idea of training monkeys to fight was first invented by the U.S. Central Intelligence Agency.

Seems like the U.S. invented quite a few of their current problems.  I guess some things have a way of coming back to bite you in the ass (or shoot you with a machine gun for a banana).

i reckon its a gimmick for the taliban more then anything else, u cant beat a cruise missile though !

The monkeys in the pictures shown are not big enough to handle an AK-47, and wouldn't have anything to do with one if they lived thruogh the first attempt. This is complete bullshit.

I think this story is highly suspect. (And Goober's argument makes sense).

Note that the source of the story is the "People's Daily News," an arm of the communist party of China.

"Recently, a British journalist went to Pakistan and Afghanistan border of Waziristan’s tribal region where he witnessed a few of the monkey soldiers armed with an AK-47 rifle and Bren light machine gun."

"Monkey" in several languages is used as a term for folks who are not to be taken serious but who at the same time can behave like quite the pain in the ass....

"However, Taliban leaders have recently taken the initiative show monkey soldiers to tourists of the Pakistan-Afghanistan border area. Apparently, the Taliban look on monkeys as "propaganda tools." "
And how about dogs with bomb-harnesses that crawl under the tanks of the enemy?

So only when we start to get confirmed kills by fully independant operating monkey-snipers armed with high-powered sniper-rifles, let us then return to this "news". But my guess is that by that time we would even have to start worry about monky's wanting to take over the planet and make a "Planet of the Apes" situation...

(yes, I know that's not how it's spelled, but I couldn't resist!)

We need to send these people a message!

And that message is: "We surrender. We are clearly outclassed a culture, and you can have our lands with immediate effect."

Not really. Story's a fake, but what a beautiful fake. It's just a shame that, given such a golden opportunity, the military "experts" couldn't come with anything better than "monkey terrorists". I'll open the bidding at "monkeyhideen". Any more?

Didn't they learn ANYTHING from "Planet of the Apes"???

If they also learn to fly, we are fooked...