A rare burrowing owl has been rescued from the world's largest cruise ship, where it had apparently tried to set up home on a miniature golf course. The "birdie" was spotted on board the Oasis of the Seas just hours before it set sail for the Caribbean from Port Everglades in Florida. Wildlife protection officers caught the owl and released it into the wild. They said a seven-day cruise of the Caribbean on board the vast ship was "obviously not suitable" for the bird.

A member of the cruise ship's crew saw the owl near the synthetic grass of the golf course on an upper deck, and called in officials from the Florida Fish and Wildlife Conservation Commission (FWC). The 360m (1,181ft) ship has a living park, complete with plants and trees, but the FWC said the owl would not have coped well with the environment. "Burrowing owls need to be in open, treeless areas where they can dig their burrow," said FWC biologist Ricardo Zambrano. 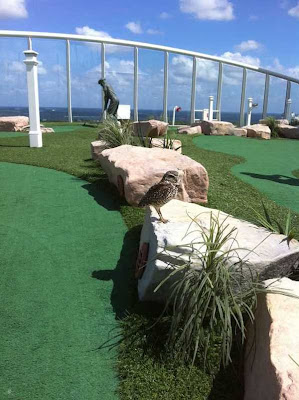 "The artificial turf on the ship's golf course resembles the fields they use for nesting in urban areas; however, it was obviously not suitable habitat for this owl." Burrowing owls grow to about 22cm (9in) tall and unlike most owls, are active during the day. They are listed as a species of special concern, meaning the birds, their nests and eggs are protected by law from interference or disturbance.

The bird was caught in a net by FWC Lt David Bingham and taken inland to be released in a more suitable location. "Never in all of my 25 years with the FWC have I seen anything like this, and I have responded to some strange calls," said Lt Bingham. "I am very pleased the owl wasn't injured and that we could get it back to a normal habitat."
Posted by arbroath at 8:08 am
Email ThisBlogThis!Share to TwitterShare to Facebook