Politicians in Romania have dropped plans to tax fortune tellers and witches amid fears they will be cursed. Officials drafted a law demanding the tax as well as measures to ensure that psychics were held liable for faulty predictions. But the plans were rejected by Romania's senate.

Alin Popoviciu, of the ruling Democratic Liberal Party, who proposed the change, said politicians were frightened of being cursed. It was not immediately clear whether Mr Popoviciu would redraft the law, to take account of his colleagues' concerns. 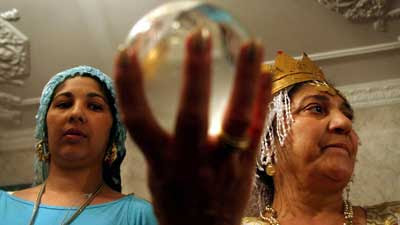 Romania is in a severe economic downturn and is trying to raise revenue from new taxes. The government hiked VAT from 19% to 24%, and slashed public sector wages by a quarter.
Posted by arbroath at 8:12 am
Email ThisBlogThis!Share to TwitterShare to Facebook