Smart phones 'can give you haemorrhoids'

It's well known that spending too long sat on the toilet ups your chances of getting haemorrhoids. Doctors advise against reading on the toilet for this very reason but the risks associated with using your phone on the toilet aren't widely known. A recent survey by Mobiles Please found that 82% of smart phone owners regularly use their phone whist sitting on the toilet spending and average of 3.5 minutes longer than those who don't.

Dr Stephanie DeGiorgio said “Sitting on any cold, hard surface for a prolonged period can increase your chances of haemorrhoids, so as tempting as it may be to finish that level of Angry Birds before you get off the toilet, you really should finish your business and go and do it somewhere more comfortable.” Only 8% of those who used their phone from the toilet said that they made outgoing calls, but 17% said that they would answer an incoming call. 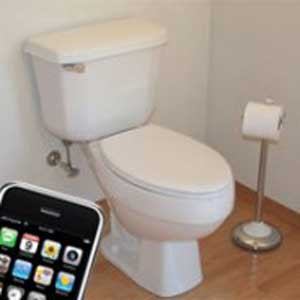 There was a small difference between the sexes with 7.49% of men and 8.46% of women making calls and 15.34% and 18.47% respectively answering incoming calls. The split was less pronounced for text messages with 97% of both sexes who used their phone on the toilet admitted to sending or reading texts. 32% of men who regularly used their phones on the toilet admitted to playing games, this figure was only 17% for women, but women caught up when it came to social networking – Of those who regularly used their phone on the toilet 57% of women accessed Facebook while only 52% of men logged on.

When comparing Iphone owners with Android and Blackberry owners it was found that amongst regular phone-in-the-toilet users Iphone owners averaged a whopping 7 minutes versus 5.4 minutes for Android and 5 minutes for Blackberry. Only 6 people admitted to using video calls from the toilet, 5 of whom were men.
Posted by arbroath at 8:07 am
Email ThisBlogThis!Share to TwitterShare to Facebook