Man has pearl removed from ear after 41 years

Some people carry around mementos from childhood - lockets, medals or rabbit's feet - to remind them of fond memories of their family and friends. Calvin Wright was one of them, only he didn't know it until just recently. Wright had been carrying a pearl from one of his mother's necklaces inside of his ear canal for 41 years. An emergency room nurse discovered the bauble when Wright went to St. Mary's Hospital in Athens earlier this month with an acute case of bronchitis.

"At first she asked if I used Q-tips," Wright said of the nurse who examined his ears and admonished him for sticking things in his ear. When she tried to remove the white mass with tweezers, however, she discovered it was hard and round, not soft and cottony. "She said, "I think it's a pearl," Wright recounted. The pearl got stuck in his right ear when Wright was 5 and roughhousing with his sister, Regina. The family lived in Chicago at the time. 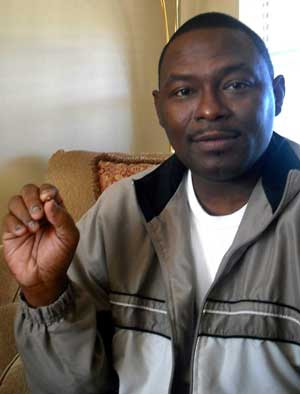 "She had broken my mother's pearl necklace," Wright said. "I can remember (our baby sitter) picking them up off the floor - except for two, of course." Regina stuck those two missing pearls into her older brother's ear. When the kids realized the pearls weren't coming back out, Wright's mother took him to Cook County Hospital. "I was screaming and hollering," he said. "I know it was bad because the doctor gave me two lollipops."

But the doctor retrieved only one of the pearls - the other escaped detection for decades. Wright is not one of those people who avoids doctors. Over the years, when he got sick he went to see the doctor. He's had his ears examined several times, but no one spotted the pearl until the sharp-eyed nurse at St. Mary's, he said. "The doctors said it was amazing that it was down in my ear for all these years and I didn't have any damage," Wright said. He says his hearing is fine, but his barber and his wife notice that he talks a little quieter now that the pearl is gone.
Posted by arbroath at 8:03 am
Email ThisBlogThis!Share to TwitterShare to Facebook