A brazen burglar duped neighbours into thinking he was picking up a car for repair when he was actually stealing it. The cheeky, suit-wearing thief broke into his victim’s house to steal the keys to the white Audi A4, before boiling the owner’s kettle to defrost the car while chatting to neighbours – some of whom are members of the Neighbourhood Watch scheme.

Neighbours assumed he was from a garage and was legitimately picking up the car, which had been on the drive of the Darlington house since the start of the heavy snowfall. Police said the case is unusual, but have warned people to be on their guard in the hope of preventing other similar incidents. 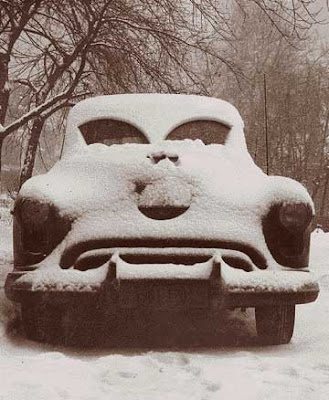 The victim, 36-year-old Mark McMullen, said: “It is unbelievable. I can’t understand the bare-faced cheek of some people. To break into my house, steal my keys, then boil the kettle and clean all the snow off my car while talking to my neighbours, then to put the key into the ignition and away he goes – it beggars belief. It is ludicrous.” The incident happened on Monday, between noon and 1pm, in Park Crescent, Darlington. The burglar also stole other items from the house, including a laptop computer.

“I am just glad my wife and daughter weren’t in the house at the time,” said Mr Mc- Mullen, a stockbroker. I want everyone to be aware of this so it doesn’t happen to anyone else. “I hadn’t driven my car since it started snowing, it had just been sitting on the drive for about two weeks. The thief was smartly dressed in a suit, so my neighbours just thought he was from the garage to pick it up. One of them is even involved in the local Neighbourhood Watch scheme.”
Posted by arbroath at 8:02 am
Email ThisBlogThis!Share to TwitterShare to Facebook