Leaving the audience wanting more is the goal of every musician, unless you're a musician in violence-torn Mexico. Two members of local group La Excelencia were murdered in a Guadalajara bar early Monday morning after refusing to play more songs past closing time.

Jonathan Martinez, 22, and Gustavo Alejandro, 35, were pronounced dead outside the Vida Divina nightclub, gunned down by unidentified assailants with suspected ties to the country's notorious drug gangs. A third victim, identified as bar patron Leslie Soltero, 26, was taken to a local hospital with a gunshot wound to her ankle. 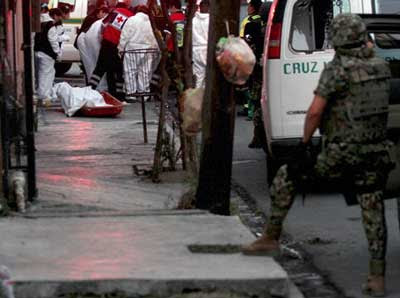 When La Excelencia's performance came to an end around 4 a.m. local time, four reportedly intoxicated and aggressive audience members demanded the musicians continue playing. Sensing trouble, the group extended its set by two songs, but was eventually forced to pull the plug by the bar's owner. Out of nowhere, one of the instigators threw a grenade at the stage. The explosion injured one person and had panicked customers running for the exits.

Martinez and Alejandro were among those who fled the bar, but they were met at the front door by a hail of bullets, presumably from the same four men who had harassed them earlier. By the time police arrived at the scene, the killers had already escaped by car. No witnesses were able to identify the getaway vehicle.
Posted by arbroath at 8:08 am
Email ThisBlogThis!Share to TwitterShare to Facebook

As a musician this hits close to home if you'll pardon the pun. It reminds me of a time i was playing a new gig at a piano bar and a guy, a large dour looking guy, sits down and mumbles 'you know any Italian songs'? He pronounced the 'I' long, as in 'eye'. I didn't understand him, so he repeats it. I said i didn't. He didn't like that. So he tells me to buy him a beer, to which i said, most people buy the entertainer a beer. He then asks if i knew 'Green Green Grass of Home' and i didn't but by that time i felt i should at least fake it. It passed, somewhat. This went on for a while and i noticed that whenever he spoke the regulars sitting at the piano all went silent. Most peculiar. I took my break and asked the bartender who this guy was that everybody seemed scared of. "Oh", he says, "that's Tony Gambino, he comes down to LA every few months to do business and always comes in here. Be careful, he's connected". "Connected" i say, "as in Gambino connected"? "As in".
So my breaks over and as i'm climbing up the riser he tells me to give him my tip money. ..... Well i don't know if it was the drinks I'd had, or the mood I was in, or what I'd seen on TV as to how you must act in prison towards thugs, but to my amazement I said, "No. That's MY money, I earned it and NOBODY takes my tips". EVERYONE went completely silent and stared at their drinks. I was silently cussing myself out when he says, "Comon outside, I want to show you something." Now the way he talked sounded just like Pauli Walnuts or any wise guy you would see on any mob show. Of course I made up some excuse that I had to start playing and he insisted and finally I said ok, knowing that that was probably going to be my last walk on this earth. So we went outside and he shows me his rolls and asks me what I think. I said its very impressive. And he says in a voice that sounded like his mouth was filled with marbles, "nobody's ever talked to me like that. You got balls kid. Balls. How would you like to go to work for me? Be my driver?" I was stunned. I told him I really couldn't. He asked me how much they were paying me and when I told him he laughed and said that was peanuts, etc. I finally told him I did it for the love, not the money and he respected that. We went back inside and he bought ME a beer! True story.