A passenger who was trying to smuggle 63kg of crabs through a Russian airport was caught due to the rancid smell of the shellfish. The man was stopped by customs officers at Moscow's Domodedovo AIrport.

It is thought the crabs, poached from the Pacific, were intended for top restaurants in the Russian capital. Customs officers stopped the passenger dragging the heavy luggage when they smelt the rotting shellfish. 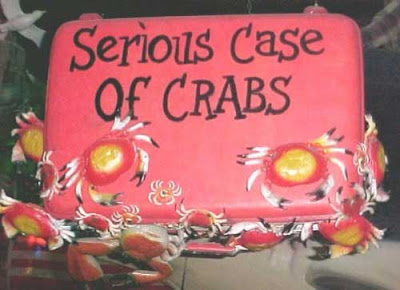 One customs officer at Domodedovo stated: ‘He said it was old washing but the smell was eye-watering.’ Said smell was due to the passenger not packing enough ice for transportation in a bid to cram in more crustaceans.

The passenger tried to deny that the crabs were for human consumption, insisting the shells were to be used for aquarium souvenirs.
Posted by arbroath at 5:07 am
Email ThisBlogThis!Share to TwitterShare to Facebook