The extreme of food now has a new treat du jour - shots of stallion semen. New Zealanders will be serving up glasses of horse semen at the famed Hokitika Wildfoods festival next month, a "delicacy" that racehorse owner Lindsay Kerslake says will have extreme foodies "raring to go". "Horses are pure testosterone, you know. They have hardly any cholesterol, so the idea is you knock it back and feel like a stallion yourself," said Mr Kerslake, of Christchurch. "You'll have as much zizz as a stallion for a week afterwards."

The NZ$10 shots won't be for the faint-hearted. Even the organiser of the edgy festival, Mike Keenan, said he wouldn't be letting the drink pass his lips. "God no, it's definitely not to my taste, but you'll be shocked how many people will go for it," he said. The keenest will be able to drink it au naturel, but the shots will also be available in cherry, licorice and banoffee pie flavours. 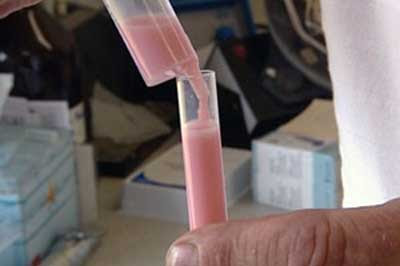 "You often hear from a female perspective that semen has an awful alkaline taste, so we thought we'd better make it more user-friendly. Think of it like a milkshake," said Mr Kerslake, who is yet to sample the delight himself. "And it's all safe - we're getting the semen in the same way breeders do, using an artificial vagina and storing it in the formula they use." The drink, to be served up by women brandishing riding whips, will be washed down with a chaser similar to Red Bull but more aptly named "Powerhorse".

On the science, Mr Kerslake is vague. "We're pretty confident tests will explain how and why it makes you feel so good, but that's still being worked on." Regardless, he's confident he'll have Kiwis lining up - "there's a lot of nutters over here game for anything you know." The festival will be held on March 12.
Posted by arbroath at 5:09 am
Email ThisBlogThis!Share to TwitterShare to Facebook

lolwut
Seriously, though, how bad can it be? I imagine it's pretty damn nutritious, even though the whole testosterone thing is probably BS. It makes no sense for semen to contain hormones.

This is so crazy.
Who is going to drink, Man? Woman?

Well, people've been been queuing up to drink other people's breast milk. I can only presume this is the first step before sperm banks allow withdrawls to the food industry.

Actually.. nevermind, they weren't drinking it for long: http://www.bbc.co.uk/news/uk-england-london-12615353