Millions of spiders have crawled into trees in Pakistan to escape flood waters, shrouding them with their silky webs. The eye-catching phenomenon is an unexpected side-effect of last year's flooding which claimed the lives of almost 2,000 people.

However, since the monsoon weather devastated the nation last July, much of the water has still not yet receded. The tiny insects have sought refuge amongst the trees weaving beautifully intricate webs between the leaves. The branches are now so cocooned in spiders webs it gives the appearance of them being shrouded in a large net. 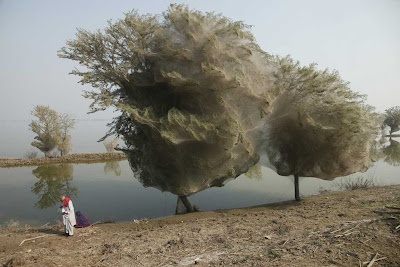 People in this part of Sindh, in south eastern Pakistan, near Karachi, have never seen this phenomenon before, but locals are reporting that there are now fewer mosquitos than they would expect, given the amount of stagnant, standing water that is around.

It is thought that the mosquitos are getting caught in the spiders web and reducing the risk of malaria, benefitting local people.
Posted by arbroath at 4:09 am
Email ThisBlogThis!Share to TwitterShare to Facebook

Those pictures give me the heebie jeebies.:-P

Sage on the Hudson said...

"The tiny insects have sought refuge amongst the trees..."

How did we live before the internet and without all this information at our fingertips?

This fascinating story and especially that picture reminded me of a local phenomenon (that unsurprisingly isn't that local at all - hello there, people of Eastern Asia!) of these caterpillars filling certain kind of trees with a similar web and eating the trees bare every few years. Thanks to Wikipedia I now know these creatures are a species of ermine moths and the trees they infest are called bird cherry trees in English. They are my favourite trees, they mark the beginning of summer by filling the city parks and residential areas with white flowers and a wonderful sweet scent. And I don't mind the moths, either, they don't hurt the trees too much and give us a spooky spectacle every now and then.

God, I love the internet.

Well, I'm not crazy about spiders. But in this case, they seem to be doing a public service! So, yay spiders!

Umm, it ain't necessarily so. This appears to be a case of anecdata. It's about as legit as that story of the snake that died from silicon poisoning recently...