Many a Peking duck has been carved up. But pet quacker Pixie may be the first who has been stitched back up after going under the knife. Her owners are estimated to have spent a staggering $5000 to save their lame duck's gammy leg.

Amputation of Pixie's injured leg wasn't an option for the water wader, who could have spent the rest of her life swimming in circles. But after they adopted her as a five-week old abandoned chick, Rebecca Irvine and David Ogilvie were not going to give up on their favourite girl. "As birds do, she imprinted and bonded with David as soon as she arrived and she sees him, both of us actually, as her parents," Ms Irvine said. 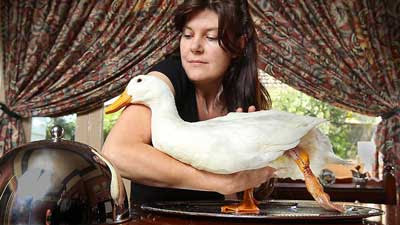 Pixie follows them around the sprawling grounds of their spacious Box Hill home and is best mates with Daphne, another rescued Peking duck. "People buy them at the markets when they are cute and cuddly tiny chicks and have no idea about how big they will grow and how hard they are to keep as pets," Mr Ogilvie said. "So we end up with them." Four months ago, the delightful duck developed a limp and a bacterial infection in the joint was diagnosed.

"We have spent weeks and months working with an expert and using antibiotics to try and cure it but it ended up needing surgery." Pixie was then referred to specialist Charles Kuntz, at Southpaws in Moorabbin, who has performed thousands of leg ligament ops on cats and dogs - and now his first on a duck. The surgery to fuse the elbow joint in Pixie's leg took only an hour and this lame duck is cured.
Posted by arbroath at 8:06 am
Email ThisBlogThis!Share to TwitterShare to Facebook

They are Wonderful Caring People
Go See how Quacked I am on facebook
We took in two starved horses,one almost dead ! But we were wacked too.