Heartbroken pensioner Doreen Gubby has been ordered to dump her collection of toy dolls after they were branded a fire hazard. Shocked Doreen, aged 70, has taken a lifetime to build up the 200-strong collection of hand made models but has been told by her local council to get rid of them following a complaint from a neighbour. The order came three days before Doreen, from St Joseph’s Court, Dinnington, was diagnosed with cancer.

Town hall officials said a neighbour had complained of ‘excessive junk’ after seeing rows of shelves displaying the dolls in Doreen’s front room. Doreen, who knits and makes clothes for all the dolls said: “I can’t believe that they say my dolls have got to be dumped. It’s taken me all my life to collect these dolls. It’s always been my hobby and they have been with me all my life. Now I have not got much longer left I’ve been told the dolls have to go - it’s a terrible wrench, it will break my heart to see them go.” 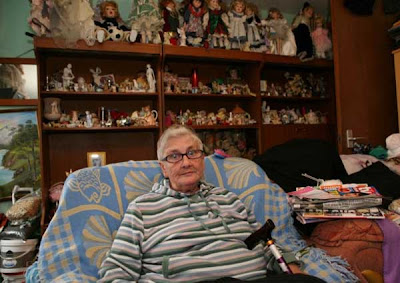 Doreen said that she had returned home from hospital following an angina attack to find her locks had been tampered with and that her flat had apparently been broken into. Management firm 2010 Rotherham which runs homes for Rotherham Council say they visited Doreen’s flat and confirmed that the dolls were a fire risk. A spokeswoman said: “We’re working closely with Mrs Gubby to remove a large amount of belongings which have become a fire hazard.

“Although we sympathise and understand that removing the items will not be an overnight task, we have to consider Mrs Gubby’s safety and that of her neighbours.” Doreen said: “I feel intimidated in my own home and I feel like I would rather be dead than keep living here. I feel so alone, it’s one thing after another. Nobody has any right to just come inside your home like that. I don’t like living here now, because I don’t know what they have touched, I feel intimidated. I’ve got nobody here any more, I just don’t know what to do.”
Posted by arbroath at 7:00 am
Email ThisBlogThis!Share to TwitterShare to Facebook

Those dolls are a fire hazard? Unbelievable. Quit bullying the old lady. You bastards.

Dolls are a fire hazard but a smoker living next door isn't?

(The rest of her apartment doesn't exactly look up to code, but piles of junk are more of a fire hazard than a doll collection!)