A hen surprised its owner when it stopped laying eggs, grew chin wattles and began to crow like a cockerel. Gertie is one of two hens kept by Jeanette Howard and her husband Jim, from near Huntingdon, Cambridgeshire.

Mrs Howard said both hens had produced fewer eggs over the winter, but then Gertie stopped laying altogether and developed male characteristics. Specialist poultry vet Marion Ford said fungi in stored feed could have the effects of synthetic hormones. Mrs Howard first noticed the changes in Gertie's appearance and behaviour a few months ago, when both hens began to moult. 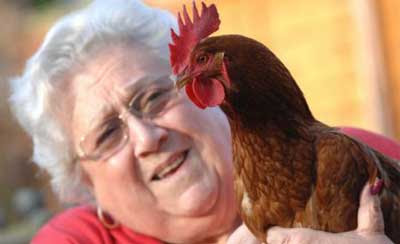 "I thought Gertie came out of that really well," she said. "She grew back lots more feathers - she was quite straggly before - and I also realised that she had filled out quite a lot. Gertie looked very healthy." Mrs Howard said Gertie then developed wattles and her comb became much larger and more distinctive than it used to be.

Gertie also began strutting around the coop and "frog-marching" around the garden. "Then a few days later I heard her try to crow. She wasn't very good at it at first, but she's progressed nicely and now she really goes for it," Mrs Howard said. Mrs Howard said: "I'm not really sure whether Gertie has actually changed sex, but to all intents and purposes she's now a cockerel."
Posted by arbroath at 8:00 am
Email ThisBlogThis!Share to TwitterShare to Facebook