A homeless sex offender who failed to supply an address to police is now to be listed as living on a park bench. Matei Haidu, 39, appeared in Belfast Magistrates Court charged with failing to notify police with his home address within a reasonable period of time.

The court heard he moved to Northern Ireland last year and became subject to the registration requirements in February. No details were disclosed of the offence which led to Haidu being put on the sex offenders' register. A Public Prosecution Service representative said he was later arrested because he had not provided police with an address. 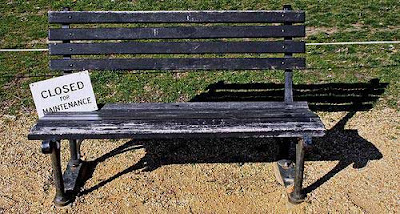 She said that while it has been classed as a misunderstanding, it was still a breach. A defence solicitor told the court his client had been allowed to register as having no fixed abode. He added that a park bench can be given as a suitable address.

Suspending a two month jail sentence for 12 months, the judge agreed that the circumstances involved a clear misunderstanding. He said: "He (Haidu) must now register an acceptable address with police. It appears (there is) the possibility of an address that is acceptable, albeit unusual."
Posted by arbroath at 7:00 am
Email ThisBlogThis!Share to TwitterShare to Facebook

This is actually quite common in the US. Homeless folk need addresses for things ranging from voting to dole checks. It's not that they actually get mail delivered there, but they need an address for the forms. Benches, bridges, intersections all satisfy the bureaucracy.

It's the first time I'd heard about it being allowed in the UK.

Usually homeless people have great difficulty getting bail and because they have no registered address, claiming benefits can be a real problem.