Drunk US evangelist claims he's on a mission from God

An American evangelist visiting Australia, who claims healing powers has walked from a NSW court without even a fine despite driving 110km blind drunk and crashing into a parked car. Self-claimed "prophet of God" Jason Hooper declared God had forgiven him for his double-shot whisky binge that ended in a mangled wreck on the Mid North Coast. "I've worked it out with the Lord. I was wrong," Hooper said. 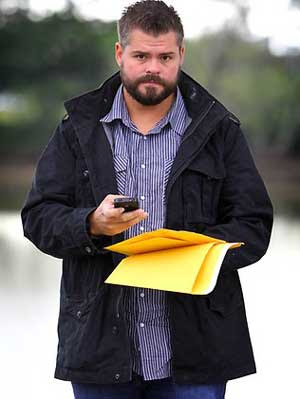 Hooper not only had God on his side but magistrate Wayne Evans who let him go, saying the preacher was a "person of good character" under a lot of "ministerial pressure". The decision disgusted local police, who said Hooper could have been sent to jail for 18 months but got off with "a slap on the wrist". The disgraced and dishevelled preacher, who claimed God had forgiven him for his terrible sins, also found he had the court on his side, escaping without a fine after he was involved in a crash with another car.

A member of the worldwide Morningstar Fellowship Church, Hooper - from South Carolina, was disqualified from driving in NSW for three years - a sentence that outraged local police and road-safety groups. "When you think about the penalties for high-range drink-driving, he got off with a slap on the wrist," a police source said. "The maximum fine is $3300 and you can go to jail for 18 months - he escaped both." The boss of a road-safety group called for Hooper to be fined and deported back to the US. 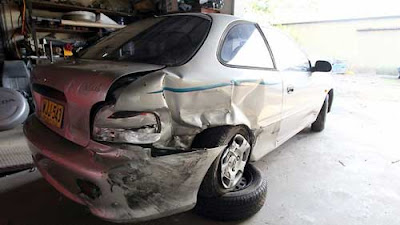 A sheepish Hooper begged the court for mercy, saying he didn't normally drink and would seek counselling on his return to the US. "I have spent the last week wrestling night and day with how I could have made such an error in judgment," said Hooper. When asked how the incident would affect his faith, Hooper said that he was forgiven because he had "worked it out with the Lord". Asked how, he said there was a "process" he had gone through for forgiveness but declined to elaborate.
Posted by arbroath at 6:05 am
Email ThisBlogThis!Share to TwitterShare to Facebook

If I claim to talk with Jesus can I get drunk and run over the judge's children without consequence? I actually work for a living and I'm surrounded by religious nut jobs, talk about pressure! Plus, I'm a really good guy who doesn't break the law and make my country, or belief system, look bad.

Mohawke: He's workd it out with the lord which implies that there's a conversation going on. If you talk to god you're religious, if god talks to you.. well, then you're just a nut.

Do we have to accept him back in the USA? Will he promise to go directly back to South Carolina?

> If you talk to god you're religious, if god talks to you.. well, then you're just a nut.

It's not clear to me that the one-way version of that conversation is any less ridiculous or disturbing than the two-way version.

It's pretty painful to read about this. There had to be some money involved. "Ministerial pressure," means he knew the right people; like actual real people that exist unlike his fictional God, which I'm sure let him crash his car without hurting anyone to teach him a lesson.