Air traffic at America's busiest international airport has been disrupted after turtles wandered on to the runway in search of a sandy beach to lay their eggs. 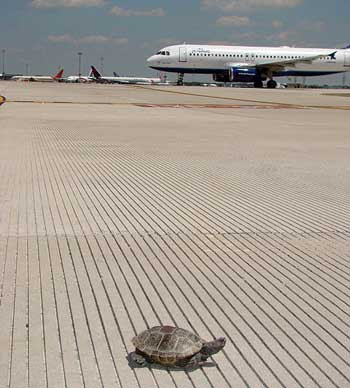 The turtles began their stately passage across John F Kennedy airport in New York on Wednesday morning, undeterred by the potentially lethal obstacles between their seasonal breeding grounds.

The creatures delayed flights, shut down a runway and forced staff outside to hurry the slow-moving animals to safer ground. Runway 4L was shut down for an hour as Port Authority teams worked to move the animals.

JetBlue reported the turtle migration on Twitter around 9.40am. "Running over turtles is not healthy for them nor is it good for our tyres," the airline said.
Posted by arbroath at 6:03 am
Email ThisBlogThis!Share to TwitterShare to Facebook

A longer aircraft to tower conversation is available here: http://online.wsj.com/video/audio-turtles-cause-runway-delays-at-jfk/4CAFA3AF-D0BA-4337-964E-BFBD361E28CD.html As it goes on more and more aircraft are piping in with more turtles they'd like removed.

Chaos? It happens every year..

Did the TSA inappropriately touch them under their shells?