A 'fatter than fat' mother of four says she's sick of fellow Australian commuters who abuse her for being obese. Stephanie Payne, 31, who once weighed 243kg, said she had been the victim of countless unprovoked, hurtful attacks from passengers.

Ms Payne said she caught an early train so she could have a seat without being abused. Fellow passengers in Melbourne have called her a "fat pig", sometimes in front of her children. 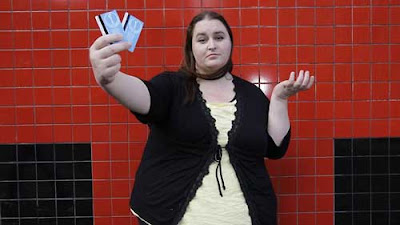 "It happens to me all the time and up until this point I've put up with it," she said. "When people tease me, it makes me feel isolated, like I don't have the right to catch a train."

Ms Payne said she should not be forced to buy a second ticket because she took up more room than other passengers.
Posted by arbroath at 6:06 am
Email ThisBlogThis!Share to TwitterShare to Facebook

Perhaps if the gentle woman were not a fat pig, people would be less likely to call her that?

What a strange thing to say, magpie. I've met several very fat people in my life, my aunt is one of them, and I've never had the urge to call any of them fat pigs, neither to their faces nor behind their backs. I probably would need some kind of brain damage to be able to be so nasty and rude.

Do you always blame the victim and not the bullies, or are fat people an exception?

Good in her for speaking up. It's not haut bigger people who take up room on the train - suitcases, bags, bikes, prams, surf boards - either way, she shouldn't be picked in.