Woman died from allergic reaction to sex with dog

A 43-year-old woman died after suffering a massive allergic reaction brought on after she had sex with a dog in Limerick, Ireland. The woman, a mother of four children, suffered the reaction to the dog’s semen after willingly engaging in sex acts with the Alsatian dog in a house in the Patrickswell area of the county.

The woman passed away in October 2008, shortly after intercourse with the dog, and after a three-year investigation it was confirmed that her death occurred due to an adverse reaction suffered after having sex with the animal. An ambulance was called to an address in Patickswell on the night that she died and rushed the woman to the Mid-Western Hospital, where she passed away shortly after. 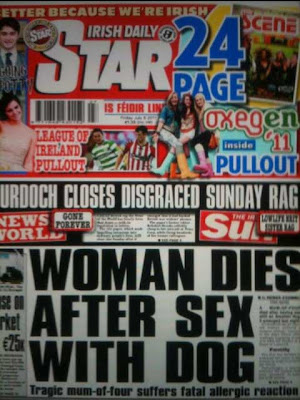 A source said that the unfortunate woman involved came in contact with a man who provided the dog on an internet chatroom. “Both these people would have been visiting bestiality websites and at some stage it appears they agreed to meet up for sex,” the source said.

“The Alsatian then entered the picture and it appears that intercourse took place between the lady in question and the dog on the night that she died.” The source confirmed that Gardai who had examined the scene seized an Alsation dog that has been kept in quarantine ever since.
Posted by arbroath at 6:04 am
Email ThisBlogThis!Share to TwitterShare to Facebook

That's probably one of the most embarrassing ways for a person to die, to the family, I mean.

Although nothing I dwell on I do hope I don't die doing something embarrassing. Of course I was thinking along the lines of a foolish driving, having a few drinks and walking into a field with a bull etc.

The woman in the article could have been a absolutely lovely person (minus her disturbing attraction to dogs). She may now be remembered solely for the dog stunt. Her poor children.

And she was from Limerick, no less.

A gal from the Emerald Isle
Fancied canine poon once in a while
She came with a shout
Just as her heart gave out
And finished n true doggy style.

^^ Anonymous, I salute you!