Man shoots self while trying to shoot snake

A 75-year-old Volusia County man was hospitalised after he accidentally shot himself in the hand while trying to dispatch a snake near his residence, authorities said. Deputies were called out to the man's West Volusia home at about 4 p.m. on Thursday after receiving a report a man, later identified as Garrett Bauernschmidt, had a self-inflicted gunshot wound.

Susan Williams, the man's caretaker, told authorities she had arrived at the home and found a large water moccasin lying near the front door. Bauernschmidt retrieved his .38-calibre handgun and shot one round of birdshot at the snake, but missed, according to a report from the Volusia County Sheriff's Office. 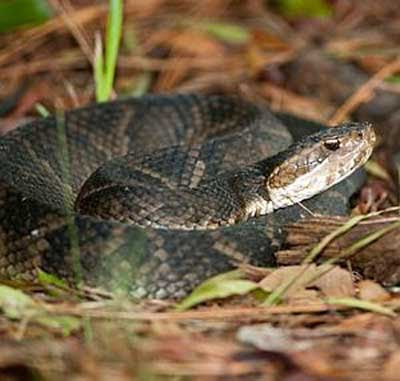 Williams told deputies the man was manipulating the safety to enable the second chamber when the gun discharged. Bauernschmidt suffered injuries to his index and middle finger on his left hand. He was treated on scene and later taken to Halifax Health Medical Center in Daytona Beach.

A family member said he was doing fine and declined further comment. No one else was injured, authorities said. The snake got away.
Posted by arbroath at 6:03 am
Email ThisBlogThis!Share to TwitterShare to Facebook