A bigger seat - it’s what he craves. A devoted, 290-pound White Castle fan is mad at the fast-food chain, which he says repeatedly broke promises to make the booths in his local eatery bigger. All stockbroker Martin Kessman wants is a place at the table. But when the 64-year-old walked into the White Castle in Nanuet back in April 2009 for his usual No. 2 combo meal, he got an unpleasant surprise. “They’re stationary booths,” he said. “I’m not humongous, [but] I’m a big guy. I could not wedge myself in.”

Mortified and in pain from smacking his knee into one of the table’s metal supports, Kessman limped out of the restaurant, and later penned a complaint to corporate headquarters. “As I looked around the restaurant, I saw that there were no tables and chairs that could accommodate a person that merely wanted to sit down and eat his meal,” Kessman wrote. He claims he has no problem finding a place at other fast-food places, and fits easily into airline seats. 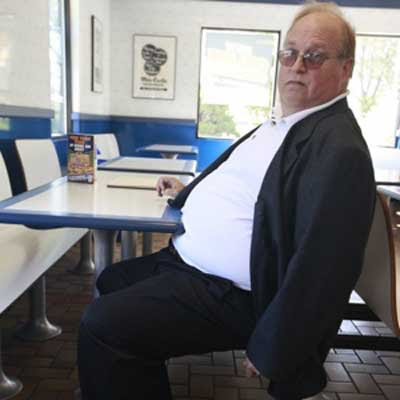 White Castle replied with three “very condescending letters” - and an offer that added insult to injury. “In each letter was a coupon for three free hamburgers - but the cheese was extra!” according to a lawsuit Kessman filed last week in Manhattan federal court. White Castle also pledged to expand its seats, Kessman claimed. “They sent me specs and everything, about how the booths were going to be enlarged and made comfortable for people with a little more weight,” Kessman said. “So two and a half years went by, and nothing was done.”

The Rockland County man says the chain’s uncomfortable booths violate the civil rights of fat people. The Americans with Disabilities Act is “applicable, not only to me, but to pregnant women and to handicapped people,” he said. “I just want to sit down like a normal person,” said Kessman, who is suing for bigger chairs and unspecified damages.
Posted by arbroath at 6:06 am
Email ThisBlogThis!Share to TwitterShare to Facebook

maybe not eating fast food is what he needs...

Next, Shaq sues every place whose doorways are not seven feet high.

I just lost a decent amount of weight...I didn't sue stores for not making pants over a 14 or 16.