Avocado thief banned from having more than 10 at a time

Avocados aren't illegal to possess, unless you're Barron Stein. Stein, a 44-year-old Fallbrook man who admitted to stealing an estimated 600 to 1,000 pounds of avocados from a Bonsall grove in March, was banned from owning more than 10 of the creamy, green fruits at a time, a judge ordered on Thursday.

Stein will stay out of jail as long as he abides by the terms of his three-year probation, which also restricts him from setting foot on any avocado grove. Violation of either could land him in jail for 180 days, according to the sentence imposed by San Diego County Superior Court Judge Kimberlee A. Lagotta. The order did not appear to differentiate between the many avocado varieties, from the 5-ounce Fuerte to the nearly 19-ounce Lamb Hass. 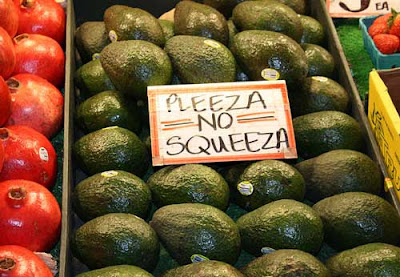 Stein, a former tow-truck driver who had been unemployed for a year and a half, took the avocados out of desperation to support his family, he said. They had an estimated value of $1,500. Security cameras caught images of Stein during the March 15 avocado heist at an Eco Farms grove near the intersection of Camino Del Rey and Luis Rey Heights Road in Bonsall.

On Aug. 23, a deputy recognized him and arrested him in Fallbrook. Stein had a prior history of avocado theft, according to a San Diego County Sheriff's Department statement released after the arrest. In addition to his avocado-related restrictions, Stein was ordered to perform community service and potentially pay restitution to the farm.
Posted by arbroath at 6:06 am
Email ThisBlogThis!Share to TwitterShare to Facebook