A German magazine cover showing the goddess Aphrodite flipping off the rest of the euro zone annoyed the Greeks when it was published back in February 2010. Now a group of Greeks are suing the journalists involved for defamation. It was supposed to be a provocative piece of journalism and a tongue-in-cheek comment on German concerns about a European Union bailout for debt-ridden Greece. But the Feb. 22, 2010 cover of the weekly German newsmagazine Focus, which showed the goddess Aphrodite making an obscene gesture, caused outrage in Greece.

At the time, the president of the Greek parliament even summoned the German ambassador to complain about German media coverage of his country. Now six Greek citizens who felt particularly offended are taking legal action against the journalists involved, including Helmut Markwort, the magazine's founder who was also editor in chief of Focus at the time of publication. Markwort and nine other Focus employees are due to appear in an Athens court on June 29. The newspapers reported that public prosecutor Ourania Stathea is looking into accusations of defamation, libel and the denigration of Greek national symbols. 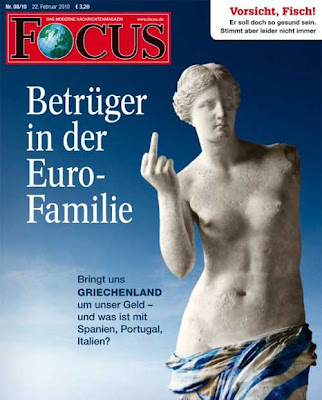 The Focus cover featured a photograph of the famously armless statue Venus de Milo, which depicts the Greek goddess Aphrodite, that had been doctored so that the deity was showing her middle finger to the viewer. The story, titled "Swindlers in the Euro Family," included a detailed description of what the authors claimed was "2000 years of decline" in Greece, including reports of tax fraud and failed construction projects. The six Greeks who are now suing the journalists maintain that the article included false claims and was also insulting to the Greek people.

Markwort, who could face up to two years in prison, appears unperturbed by the accusations, however. He said that he had a "clean conscience" and had only been performing his "journalistic duty." He said he would only get the magazine's lawyers involved once he had received an official court summons. Markwort also asserted that he was a great fan of Greece. "I'm not on the run, and I'm also not afraid that I will have to go to prison," he said.
Posted by arbroath at 6:04 am
Email ThisBlogThis!Share to TwitterShare to Facebook

Sounds reasonable to me. What the idiot Germans have yet to realise is that it wasn't the Greek people who lied about the state of their economy to get into the Euro. It wasn't the Greek people who screwed their economy even further. It was the Greek government. Like many countries in the Euro the majority of Greeks didn't even want the Euro, but the countries shortsighted leaders who thought they could ride on the coattails of the powerul economies in the zone.

German people have long got upset as being characterized as Nazis - and that is quite understandable. However they can't complain about other nations doing to them what they are doing to the Greeks.

A country, its people and its government can't be so neatly separated, Gareth. The Greek people would have no responsibility for the actions of the Greek government only if the people had nothing to do with the election of the said government in the first place. Once again, the world is not black-and-white.

An interesting POV, but you can't say that a nation supports the actions of their government simply because they elected them. That's not how a parliamentary democracy works.

The people vote for a representative and a government is formed. Often less than 50% of the population voted for that government, bear in mind the size of the turnout. In the case of a coalition then NOBODY voted for the government that they got saddle with. Once the government is in power they have a term, in which to do whatever they want. During that time there is virtually nothing the people can do no matter how much they dislike the government's actions or how much of a mess the government is making of the country. They have to wait until the next election before they can do anything about the situation.

I'm certainly not saying the people are wholly responsible for the actions of its government, just that they aren't entirely blameless, either.