A three-year-old boy dialled 999 for help after his drunk babysitter consumed more than a bottle of wine. The boy was so concerned about Jacqueline Campbell's condition that he managed to call the emergency services. He used Campbell's mobile phone to report her to the police and was able to open the door to the officers when they arrived after midnight.

Perth Sheriff Court was told on Thursday that Campbell was "clearly drunk" but she confirmed to the police that it had been the toddler who had called them for help. Fiscal depute Carol Whyte said: "At half past midnight police attended in response to a 999 call they had received. The accused said it was the boy who had made the telephone call.” 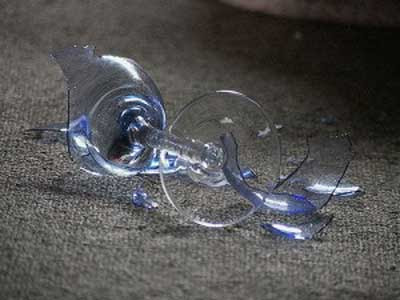 The court was told that 40-year-old Campbell had drunk more than a bottle of wine and became aggressive towards the officers who arrived. Ms Whyte added: "The police gave suggestions and advice to the accused and at that she picked up a glass from the kitchen and threw it towards PC Strawson. The glass hit the ground beside the officer and smashed." Campbell, from Perth, admitted assaulting PC Isobel Strawson by throwing a glass at her at Kenmore Street, Aberfeldy, Perthshire, on October 16, 2010.

Solicitor Paul Ralph, defending, said Campbell had previously been a talented golfer but her life had spiralled out of control and she sometimes went to "dark places". Sheriff Lindsay Foulis told Campbell: "You clearly have issues. If you offend further you are limiting the options I, or any of my colleagues, have with regard to sentence." He placed her on probation for 18 months and ordered her to undertake drug and alcohol counselling, as well as getting psychiatric treatment if required.
Posted by arbroath at 6:01 am
Email ThisBlogThis!Share to TwitterShare to Facebook

If a bottle of wine makes you drunk enough to lose control then you should give up drinking, you obviously have no resistance to booze. However I suspect that she had drunk an awful lot more than the story suggests.

If you can't drink a whole bottle of wine without losing control, you should give up drinking altogether? Frankly, Gareth, that's stupid. Why not just know your limits?

I'm not a terribly large person and I seldom drink alcohol, and even then, by "normal people" standards, I don't drink very much at all. A couple of glasses of wine is plenty for me, at that point I consider myself to be delightfully and sufficiently under the influence. I know that if I emptied a whole bottle, I would most likely be pass out drunk by the end of it. I have no intention to ever try that out, though, I experienced getting properly drunk once and it was awful, I absolutely hated it. Never again.

So, I know my limits, I never drink more than I can handle, you'lle never find me blacking out, throwing up or being hung over. While I freely admit I can't drink a bottle of wine, I would suggest I am at least as compatible with alcohol than anyone who can empty the thing without losing control.

Having no resistance to booze is not a problem, it's economical.